Governor Gavin Newsom released attack ads on Monday urging Florida residents to move to California in the days after it became the first state to move to offer all illegal immigrants state-subsidized health insurance.

Newsom bought $105,000 worth of ad spots that started airing on Fox News in Florida, which is sparking speculation that he could mount a presidential run in 2024.

The ads urge Sunshine State residents who are fed up with their Republican Governor Ron DeSantis to head west. DeSantis is rumored to be considering a 2024 run as well – despite former President Donald Trump likely to seek the nomination.

The 30-second ad doesn’t mention DeSantis directly, but does take aim at his conservative legislative accomplishment in Florida – like banning critical race theory in classrooms, prohibiting schools from teaching about sexual orientation and gender identity to kids from kindergarten to fourth grade and a 15-week abortion ban.

‘It’s Independence Day,’ Newsom says in the ad, which aired on Monday, July 4. ‘So let’s talk about what’s going on in America.’

‘Freedom is under attack in your state,’ Newsom tells Florida residents watching the ad. ‘Republican leaders — they are banning books. Making it harder to vote. Restricting speech in classrooms. Even criminalizing women and doctors.’

The expansion in healthcare is part of Medi-Cal, which already offers coverage for illegal immigrants younger than 26 and over 50 – as well as recipients of the Deferred Action for Childhood Arrivals (DACA) program. 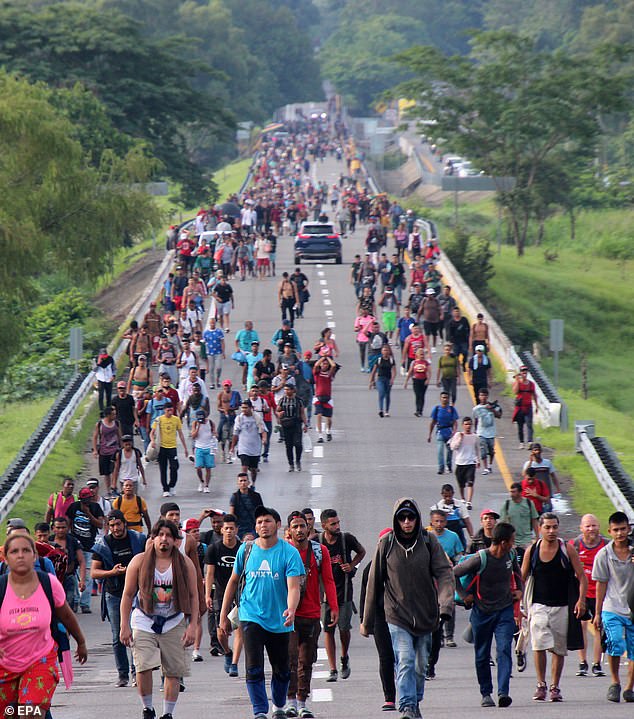 The move to provide more healthcare comes as thousands of migrants continue to surge over the U.S. southern border every day. Pictured: A caravan of migrants head toward the U.S. in June 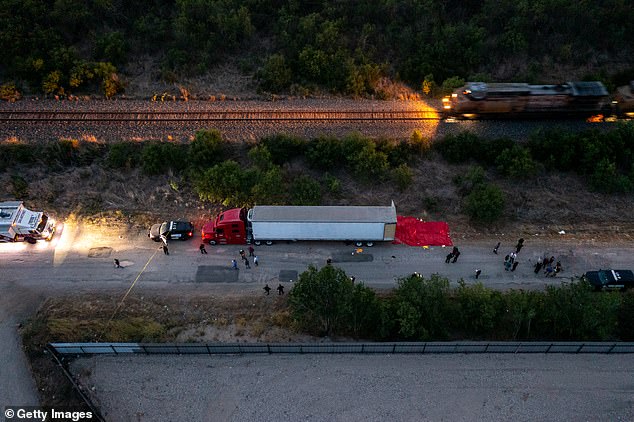 It also comes less than a week after an abandoned semi-truck was found on the side of the road outside San Antonio, Texas with dozens of migrants in critical condition and another 53 dead

Now, the state is expanding that coverage option to 700,000 undocumented residents in the Golden State between the ages of 26-49 starting January 2024.

Migration continues to surge at the southern border with the third straight month of increased crossings in May.

Thousands of migrants part of a caravan that started in southern Mexico ended their travels toward the U.S. border just two days after setting off when they were handed permits to stay in the country for 30 days.

Mexican officials handed out 3,000 temporary residence permits on Sunday and ended the march of mostly Venezuelans and Central Americans.

The move comes after a United Nations Missing Migrants Project report revealed that more migrants died in 2021 in America than in any other year since it started recording data in 2014.

Authorities found a semi-truck full of around 100 migrants last Monday abandoned in sweltering conditions on the side of the road outside San Antonio, Texas. Dozens were left in critical condition and 53 died in the journey.

The incident was the deadliest human smuggling tragedy in U.S. history.

The recent analysis from the UN found that 1,238 migrants died or disappeared in the Americas in 2021. The project said that this is likely an undercount since there were issues with data collection last year.

Mexican authorities are likely trying to combat recent tragedies at the border and the increased scrutiny by breaking up a caravan that was heading to the U.S. border from southern Mexico. 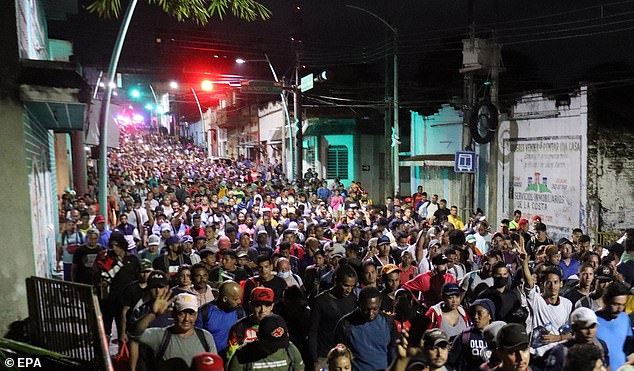 Mexican authorities were able to break up a caravan of thousands of Venezuelan and Central Mexican migrants heading to the U.S. border by handing out 3,000 temporary residence permits on Sunday 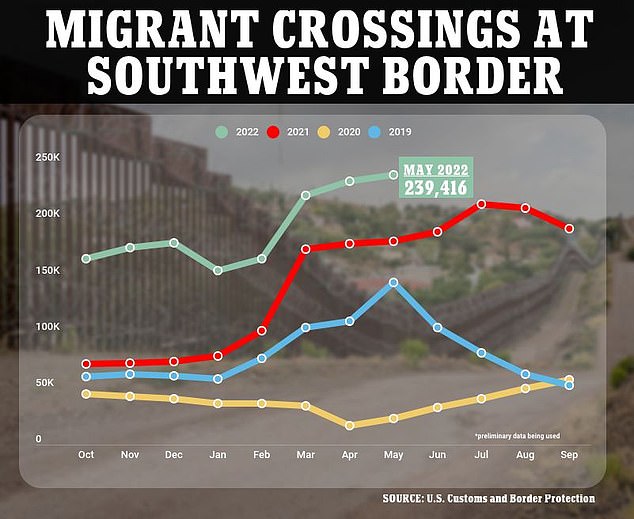 The migration crisis continues to surge under the current administration as CBP encountered 239,416 migrants in May – the highest since Biden took office

The temporary residence permits will allow these migrants to stay on Mexican territory for up to 30 days while they pursue immigration procedures, according to officials from Mexico’s National Institute of Migration.

This, however, only serves as a way for migrants in the caravan to expedite their trip north, claiming that the permits allow them to get off foot and continue through other modes of transportation.

‘We are going to continue to the United States in buses because we already have the permit. We no longer need to walk,’ a Venezuelan, William Molina, said after receiving his permit. He is traveling with 10 relatives.

The thousands of migrants, which started walking from the border city of Tapachula on Friday, was the ninth migrant caravan to be formed so far this year in southern Mexico.

Migration has returned to the spotlight following the discovery last week of an abandoned cargo truck in San Antonio.

The tragedy coincided with a ruling by the U.S. Supreme Court allowing the Biden administration to end a measure imposed by President Donald Trump that forced asylum seekers to wait in Mexico while U.S. officials processed their asylum petitions. 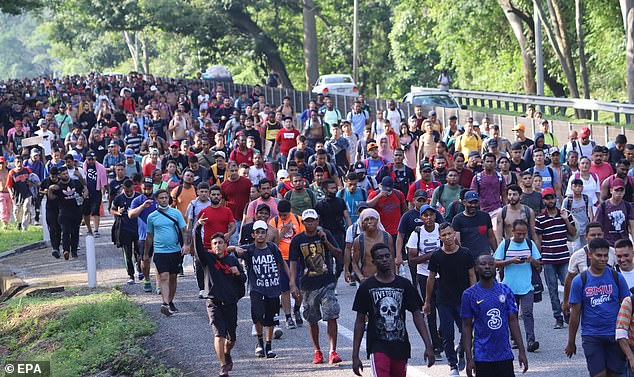 A group of around 4,000 migrants set off from Tapachula, Mexico on July 1 heading toward the northern border it shares with the U.S. The group split after just two days when 3,000 permits were handed out that allows the migrants to stay in Mexico for 30 days as they pursue immigration procedures 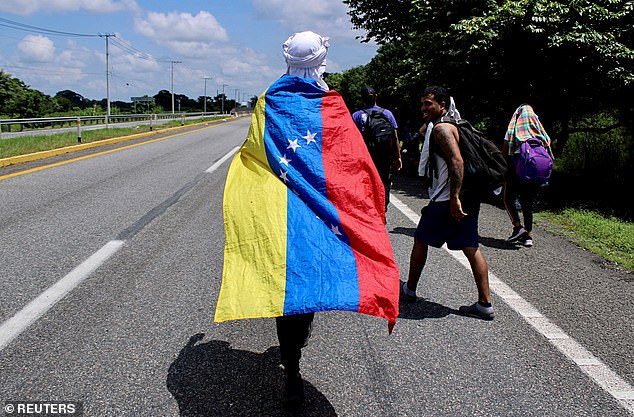 One migrant wears a Venezuelan flag around his neck as he walks with other migrants in a caravan toward the U.S. border on Friday, July 1

While the migrant caravans have attracted news media attention, those who participate in them represent a small percentage of the migratory flow that arrives at Mexico’s border with Guatemala daily, usually with the help of smugglers.

Another Venezuelan in the group, Francisco Daniel Marcano, said he hoped the permit would help him reach northern Mexico and pass into U.S. territory. But, he said, if he fails to get into the U.S., he will try to find a job in northern Mexico to earn money to send to his parents and three children back in Venezuela.

In the last 30 days at least three large groups totaling about 13,000 people have tried to leave the border with Guatemala on foot, according to Mexico’s immigration agency.

Many migrants object to the Mexican strategy of keeping them in the south, away from the U.S. border. They say the process of normalizing their status – usually through applying for asylum – takes too long and they can’t provide for themselves while waiting weeks in Tapachula because jobs are scarce.

But the latest caravans, made up mostly of entire families, have managed to advance only about 28 miles to Huixtla, where Mexican officials have succeeded in dispersing the groups by giving out temporary residency permits.

Migration at the U.S. southern border has continued to spike into the summer months.

Customs and Border Protection (CBP) encountered 239,416 migrants in May alone, which represents an increase for the third month in a row. Figures for June have not yet been released.