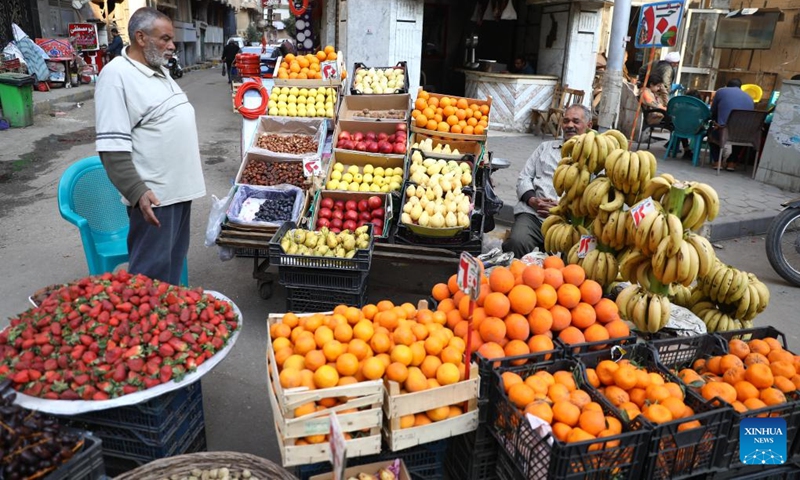 People sell fruit at a market in Cairo, Egypt, on March 9, 2022. Egyptian Prime Minister Mostafa Madbouly on Wednesday pledged to keep food prices in the fair range amid the ongoing conflict between Russia and Ukraine.(Photo: Xinhua)

Egyptian Prime Minister Mostafa Madbouly said on Sunday that Egypt will not have a crisis in wheat supplies despite the repercussions of the ongoing conflict between Russia and Ukraine, two main wheat exporters to Egypt.

Madbouly’s remarks came during a press conference at the investment authority headquarters in Cairo to shed light on the country’s economic situation amid the global rising inflation.

The national project of increasing agricultural lands has enabled Egypt to increase wheat growth, he said. “This year, for the first time in the history of Egypt, we are expected to reach 10 million tons of wheat production.”

Egypt has wheat reserves sufficient for four months, and with continuing local wheat production, it is expected to be sufficient till the end of 2022, he noted.

Egypt has reserves of basic commodities, including wheat, cooking oil, rice, poultry, meat and others sufficient for four to six months, according to Madbouly. The worldwide inflation surge led the US Federal Reserve to recently increase its interest rate, and several central banks across the world have followed suit.

Madbouly said it is “likely” that Egypt is going to increase its interest rate too.

“The percentages and timings are completely subject to the assessment and evaluation of the Central Bank of Egypt,” he added.

Besides, Egypt plans to reduce the gross government debt from 85.8 percent to 75 percent of the GDP by 2026, revealed the prime minister.

To face inflation, Egypt will provide 130 billion pounds (about $7 billion) in the coming general budget to ease part of the burdens suffered by the citizens, increase beneficiaries of social protection programs and maintain providing low-price food commodities, said Madbouly.

Give Floridians additional choices alongside ObamaCare