To print this article, all you need is to be registered or login on Mondaq.com.

The Federal
Inland Revenue Service (FIRS) has issued a Public Notice
(“the Notice”) communicating that the Honourable Minister
of Finance, Budget and National Planning (“Minister of
Finance”) has approved certain increments in Withholding Tax
(WHT) rates on dividends, interest and royalties paid by residents
of Nigeria and beneficially owned by residents of countries with
Double Taxation Agreements (DTAs) with Nigeria effective 1 July
2022.

Since 1999, Nigeria has been unilaterally
implementing a uniform WHT rate of 7.5% on dividends, interest and
royalties paid by residents of Nigeria and beneficially owned by
residents of Nigeria’s tax treaty partners. The 7.5% rate is
lower than the average 10% rate applicable under the Nigerian tax
laws and was implemented based on the budget pronouncement made by
the then Military Head of State.

The Notice therefore states that the Minister of Finance has
approved the discontinuation of the unilateral application of a
uniform WHT rate of 7.5% on such dividends, interest and royalties
and that the rates specified in the tax laws will now apply, except
where it exceeds the maximum rate specified in the tax treaty; in
which case, the maximum rate in the tax treaty will apply.
Accordingly, the Notice provides that the following WHT rates will
apply to Nigeria’s tax treaty partners with effect from 1 July
2022: 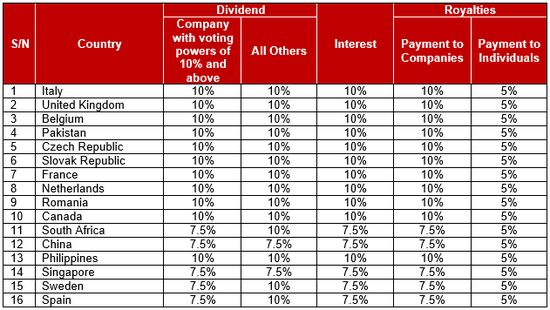 In addition to the foregoing, the Notice states that in granting
tax treaty benefits to residents of the countries with which
Nigeria has DTAs, such residents and all agents of deduction of
WHT, including government departments, agencies and parastatals,
statutory bodies, companies, institutions and other establishments
approved for the operation of PAYE system are required to comply
with its contents as well as the contents of FIRS updated Circular
No 2022/15 on the Claim of Tax Treaties Benefits in Nigeria, which
stipulates the procedure for granting such benefits (Click here to access
the FIRS Circular).  It further clarifies  that any
previous ruling, direction or approval issued by the FIRS on
applicable WHT rates with respect to any tax treaty is hereby
withdrawn with effect from 1 July 2022.

The issuance of this Public Notice implies that, in many
instances, there may be no difference in applicable WHT rates for
treaty and non-treaty countries save for certain specific treaties
concluded with South Africa, China, Singapore, Sweden and Spain
which contain a lower WHT rate. As such, companies wishing to take
benefits of any treaty will need to be properly informed about the
rates applicable to their specific treaty or if the rates in the
tax laws will apply. They may also wish to evaluate their business
models and operations to determine if they are still eligible to
claim the benefits of any treaty.

Based on the foregoing, there may be concerns as to the powers
of the Minister of Finance or the FIRS to alter the 7.5% DTA rates
which were applied by virtue of the budget pronouncement by the
Military Head of State in 1999. In this regard, the rates have been
applied over the years and even if they were not documented in a
Federal Government gazette or backed by legislation have been taken
to be the position of the law and applied by the FIRS itself,
companies, individuals and treaty partners ever since. In effecting
a change in these rates, it will be far tidier to do so by
legislation (Finance Act, 2022) as this will carry the full force
of law and be less open to challenge or controversy. Additionally,
it will create certainty in the law rather than this approach of
issuing a circular.

As the Federal Government continues to make efforts to improve
its tax revenue, it is important that taxpayers are constantly
aware of any changes introduced in the laws and administrative
practices of the FIRS and other tax authorities in order to ensure
compliance with the provisions of the law.

The content of this article is intended to provide a general
guide to the subject matter. Specialist advice should be sought
about your specific circumstances.

POPULAR ARTICLES ON: Tax from Nigeria

Why Chewy Stock Could Be a Buy in the Coming Weeks

Why Chewy Stock Could Be a Buy in the Coming Weeks

Has Mr. Cooper Milked About All It Can From Mortgage Servicing?