Just over 4,300 mortgages were approved last month, down 5.9% on the previous month and 1.3% on the same time last year.

New figures from Banking and Payments Federation Ireland reveal that 53% of the approvals or 2,296 went to First Time Buyers (FTBs), while 923 or 21% went to mover purchasers.

The value of mortgages approved dropped by 3.7% on the previous month, but was up 6.9% on the same time last year.

Mortgages worth a total of almost €1.2 billion were approved in April, of which FTBs accounted for €635m and mover purchasers for €287m

“While our latest mortgage figures show a slowdown in approvals growth, it’s important that we look at this in the context of the historically high levels at which the market has been operating for quite some time now, so it’s not unexpected to see some dips like we have during April,” said Brian Hayes, Chief Executive of BPFI.

The figures show that over 54,000 mortgages were approved in the 12 months ending last month, with 29,000 going to FTBs.

“These are still close to the highest levels seen since the data series began in 2011,” Mr Hayes said. 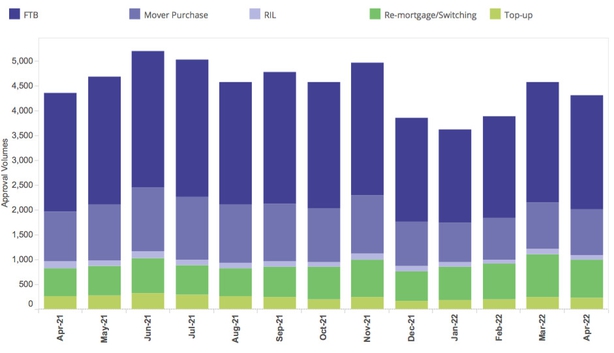 According to the figures, remortgage or switching activity continued to grow last month, up 37.2% in volume terms on April 2021, and up just over 43% in value terms to €206 million over the same period.

Mr Hayes said this reflects the competition in the market and the fact that mortgage customers continue to shop around for better rates.

“As we look ahead what is certain is that we have a very strong pipeline of approvals ensuring the outlook is positive for drawdowns as we progress through the year,” he said.