Rising mortgage interest rates are squeezing homebuyer budgets as the cost of living crisis threatens to put the brakes on two years of frenzied activity and soaring prices in the UK property market.

Figures from the Bank of England released on Wednesday showed the effective interest rate on newly drawn mortgages — the actual interest rate paid — increased by 14 basis points in March to 1.73 per cent.

The increase comes as the BoE’s Monetary Policy Committee considers again whether to raise its main interest rate to curb inflation.

“While housing demand potentially will be supported by the savings that households have accumulated during the pandemic, the combination of falling real disposable incomes, low consumer confidence and rising mortgage rates is too toxic for the housing market to come away unscathed,” said Samuel Tombs, chief UK economist at Pantheon Macroeconomics.

Interest on mortgages has edged up since hitting historic lows during the pandemic lockdown, when the central bank slashed the base rate of interest to 0.1 per cent to cushion the economy.

It has since increased the rate gradually to 0.75 per cent but, in a closely watched decision on Thursday, policymakers could announce a further increase, most likely to 1 per cent.

BoE analysis of new mortgages showed new quotes for two-year fixed rate products at loan-to-value ratios of 75 per cent carried an average interest rate of 2.11 per cent last month, up from 1.23 per cent in August 2021.

Some economists predicted a fall in prices as buyers are able to borrow less. “If we are right that interest rates will be raised to 1 per cent tomorrow and to 3 per cent next year . . . then it won’t be long before the housing market slows,” Paul Dales, chief UK economist at Capital Economics, said. 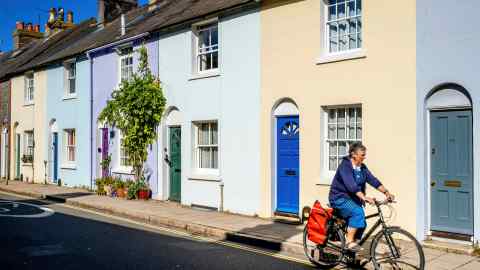 BoE figures on Wednesday also suggested the housing market could be calming down — but analysts were divided over the extent to which this would affect demand and prices.

Net borrowing of mortgage debt increased to £7bn in March from £4.6bn in February. The sharp rise reflected frenzied activity at the beginning of this year, as buyers scrambled to take advantage of low rates and demand outstripped supply, pushing up prices.

However, March figures for the number of mortgage approvals, which indicate later purchases and future borrowing, were little changed at 70,700 compared with 71,000 in February.

Mark Harris, chief executive of mortgage broker SPF Private Clients, said the figures indicated a more stable housing market. “This suggests that the froth has come out of the market, leaving a calmer, more measured, and ultimately more sustainable version.”

Economists have warned the UK could face a period of stagflation, with consumer prices increasing by 7 per cent in March, while GDP grew by just 1 per cent in February and real wages contracted by 1 per cent.

Anthony Codling, chief executive of property platform Twindig, said rising rates were one of a combination of factors set to affect house prices, including a perception of greater risk and declining real incomes as the cost of living crisis bites.

However he added that some aspects of the cost of living crunch could push up property values, with households still drawing on lockdown savings and assets like property proving a more attractive investment as inflation degrades the value of cash.

“In the context of longer history, mortgage rates are still very low indeed,” he added. “I wouldn’t panic.”