THE first quarter saw the country’s largest banks expand their loan portfolio at the fastest pace since the start of the coronavirus disease 2019 (COVID-19) pandemic two years ago.

BusinessWorld’s 1st Quarter Banking Report showed the combined loans of 45 universal and commercial banks (U/KBs) rose by 6.21% year on year to P9.93 trillion in the January-March period, faster than the 5.93% growth in the previous quarter.

It was the fastest expansion in eight quarters, or since the 9.73% growth recorded in the January to March period in 2020. 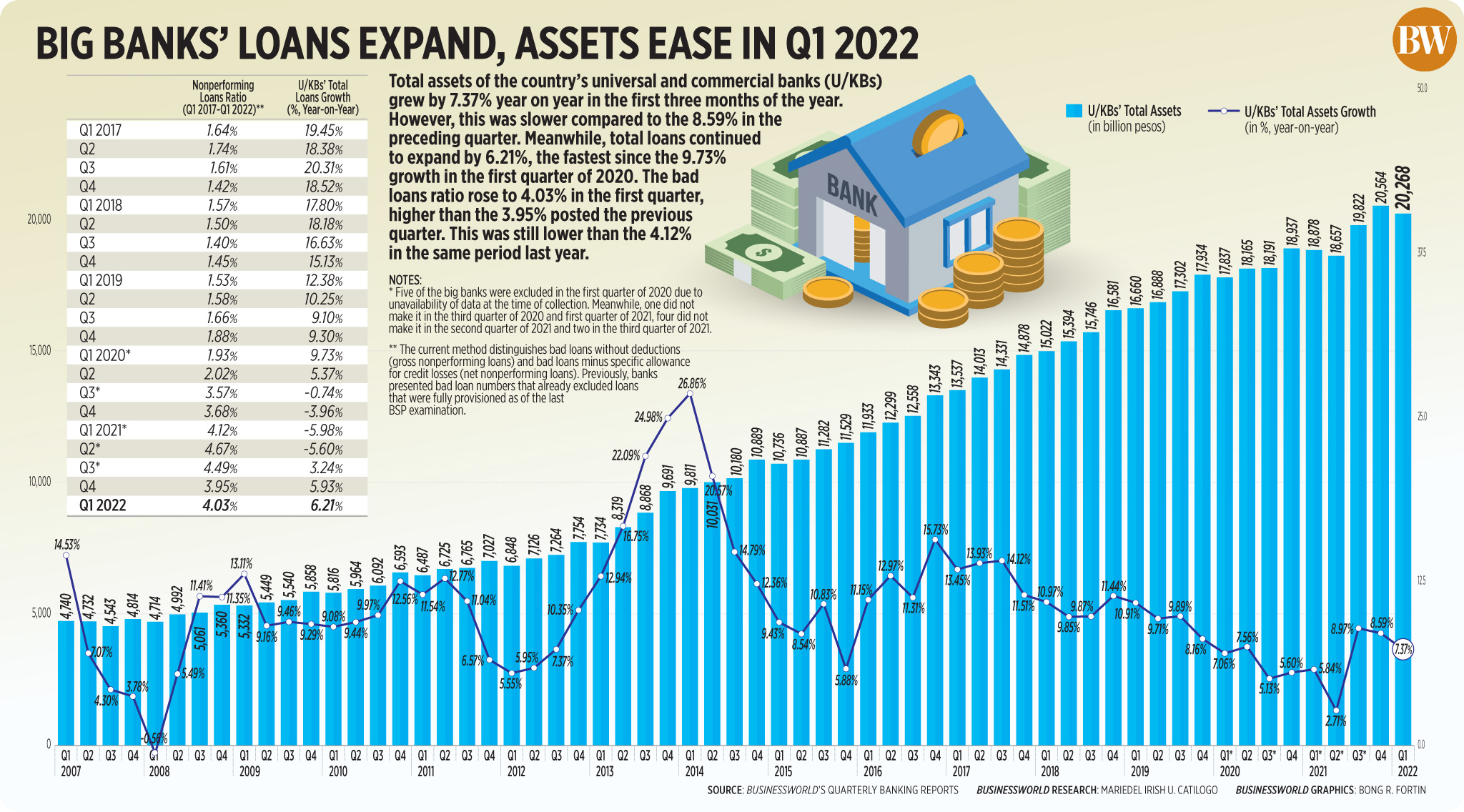 However, this pace was slower than the 8.59% growth logged in the previous quarter, but quicker than the 5.84% seen in the first three months of 2021.

The asset growth was the slowest in three quarters, or since the 2.71% posted in the second quarter of 2021.

In terms of profitability, the median return on equity (RoE) stood at 3.96%, inching up from 3.11% seen in the previous quarter and 3.89% RoE in the January-March period a year ago. The RoE or the ratio of net profit to average capital measures the amount that shareholders make on their investments in a company.

This brought the NPL ratio — the share of soured loans to the total loan portfolio — to 4.03% in the first quarter, higher than 3.95% in the preceding quarter but still lower than the 4.12% in the January-March period in 2021.

Financial assets are considered nonperforming when they are considered impaired under existing accounting standards or there is evidence that full repayment of principal and interest is unlikely without foreclosure of collateral, if any.

In relation to the total assets, foreclosed real and other properties stood at 0.26%, inching up from 0.25% in the preceding quarter. It was lower than the 0.28% recorded in the first quarter of 2021.

Total loan loss reserves amounted to P363.56 billion in the first quarter, higher than the P341.23 billion seen in the previous quarter and the P325.26 billion last year.

The UK/Bs’ median capital adequacy ratio — the ability to absorb losses from risk-weighted assets — rose to 21.73% in the first three months of the year, from the preceding quarter’s 21.30% and the 19.78% in the same period last year.

The ratio remains well above the regulatory minimum of 10% set by the BSP as well as the international minimum standard of 8%.

Among banks, BDO Unibank, Inc. had the largest assets with P3.611 trillion as of the first quarter. It was followed by Land Bank of the Philippines (LANDBANK) with P2.808 trillion, and Metropolitan Bank & Trust Co. (Metrobank) with P2.718 trillion.

The merger of the United Coconut Planters Bank and LANDBANK became effective on March 1.

BDO was the top bank with P2.301 trillion worth of loans issued, followed by Bank of the Philippine Islands with P1.456 trillion and Metrobank with P1.192 trillion.

In terms of deposits, BDO ranked first with P2.819 trillion, followed by LANDBANK with P2.461 trillion and Metrobank with P2.043 trillion.

Among banks with assets of at least P100 billion, Standard Chartered Bank recorded the fastest year-on-year growth with 50.74%. It was followed by Rizal Commercial Banking Corp. (19.42%), and LANDBANK (16.57%).

Meanwhile, LANDBANK remained as the most aggressive lender in the first quarter with an annual increase of 24.64%, followed by Bank of Commerce’s 16.62% and The Hongkong & Shanghai Banking Corp. Ltd.’s 14.61%.

BusinessWorld Research has been tracking the financial performance of the country’s biggest banks on a quarterly basis since the late 1980s using banks’ published statements of condition. — M. I. U. Catilogo

Fixing the Obamacare ‘glitch’ that pushed one couple to divorce

Fixing the Obamacare 'glitch' that pushed one couple to divorce