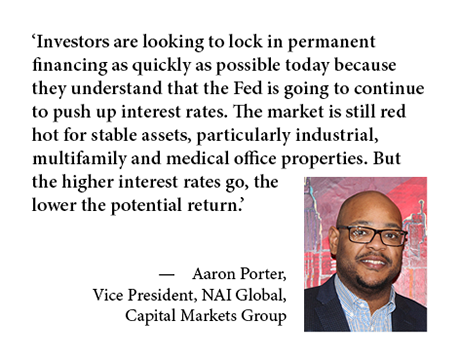 Beginning in the fourth quarter of 2020, commercial real estate buyers and sellers moved off the sidelines and began fueling an impressive investment sales rebound as many pandemic-related lockdowns and restrictions eased or ended. The rush to purchase hard assets hit its apex a year later when commercial property sales surged to a record $362 billion in the fourth quarter of 2021 alone, according to Real Capital Analytics, a part of MSCI Real Assets that tracks property transactions of $2.5 million or more.

But given rising interest rates and other recent headwinds, will investors continue to drive robust investment activity and bid up prices? The 10-Year Treasury yield has spiked some 150 basis points to around 3 percent since the beginning of 2022, and fixed 10-year mortgage rates of between 3 percent and 4 percent are up about 100 basis points. For short-term variable loans, the benchmark secured overnight financing rate (SOFR) has surged to 0.8 percent from 0.05 percent.

Meanwhile, an annual inflation rate at a 40-year high and a decline of 1.4 percent in GDP in the first quarter are adding more uncertainty to the market. Additionally, in March, the 2-Year/10-Year treasury yield curve inverted briefly. These indicators signal that significant changes are coming to the commercial property sector, suggests Gisella Haidar, a senior vice president at NAI Global’s Capital Markets team in New York City.

“Usually, an inverted yield curve is a pretty good indication that we’re headed for a downturn in the economy,” she says. “Who knows if it will happen in two months, three months or six months. But coupled with high inflation, I think that it will definitely have an impact on commercial real estate investment and cap rates.”

So far, however, cap rates for most property types have continued to compress, according to CBRE’s U.S. Capital Markets report for the first quarter of 2022. While the price increase reflected in Real Capital’s index represented a 170-basis-point deceleration from the fourth quarter of 2021, equity funds and lenders still have a lot of capital to put to work, declares Aaron Porter, vice president at NAI Global’s Capital Markets group in Nashville, Tennessee. Plus, the relative attractiveness of commercial property compared to stocks amid the broad losses suffered in the equity market over the last couple of months continues to appeal to investors, he adds.

At the same time, the Federal Reserve’s 75-basis-point increase of the benchmark federal funds rate so far this year along with strong indications that it is committed to more hikes is convincing many buyers to act now, he says. Porter also predicts that the market will begin to see the real impact of the Fed’s actions over the next six to 12 months or so as demand for loans slows.

“Investors are looking to lock in permanent financing as quickly as possible today because they understand that the Fed is going to continue to push up interest rates,” Porter states. “The market is still red hot for stable assets, particularly industrial, multifamily and medical office properties. But the higher interest rates go, the lower the potential return.”

Indeed, in light of higher interest rates, Haidar and Porter anticipate that lenders will require borrowers to come up with more capital to secure financing, especially if cap rates don’t adjust in a meaningful way. What’s more, whereas lenders were comfortable allowing full-term or other generous interest-only payments periods for stabilized assets, they have begun reining in the provision except for the highest quality properties that are fully occupied and have strong cash flow, Porter adds.

“When interest rates were low, lenders were pretty confident in a borrower’s ability to pay and were more lenient,” he says.

So far, the changing market has not caused a shift in what assets or strategies investors are favoring or their ability to close on deals, Haidar points out. She’s primarily working with value-add and distressed investors in secondary and tertiary markets, although the supply of opportunities remains stubbornly low.

The hybrid working model that many companies are adopting continues to make office investments more difficult, Haidar and Porter say. Like a lot of business districts, Manhattan is still suffering from low utilization rates in offices, especially in older Class B and C properties.

“There’s a huge question in our industry right now as to how to get people back to the office,” Haidar states. “And I think the answer is that you get them back by giving them an experience that they don’t get at home. That means giving them the top amenities in a place where they can feel comfortable, and as a result, we’re clearly seeing a flight to quality.”

Heading for a Standoff

Regardless of which property type or strategy buyers are pursuing, those that need debt should anticipate interest rates climbing to around 6 percent or higher by the end of the year, if not sooner, Haidar and Porter predict. Such a significant increase should eventually put upward pressure on cap rates, but how much and how fast they move remains to be seen.

“The variable at that point becomes the buyer and seller,” Porter says. “Buyers are going to want to acquire deals at a cap rate of 7 or 8 percent while sellers have been used to seeing deals trade at a 6 cap or below. At that point, I think sellers will just hold onto properties because they aren’t going to get the pricing they’ve grown accustomed to.”

— By Joe Gose. This article was written in conjunction with NAI Global, a content partner of REBusinessOnline. For more articles from and news about NAI Global, click here.