May is recognized as Mental Health Awareness Month in the United States to raise awareness of mental illness and advocate for improvements in mental health care. Exacerbated by pandemic restrictions in the last two years, mental health issues affect a growing proportion of Americans and include mental, behavioral, and emotional disorders, the effects of which can range from mild to severe impairment to an individual’s daily life. The Centers for Disease Control and Prevention estimates that roughly one in five Americans experience mental illness in a given year, and the National Institute of Mental Health suggests prevalence may be even higher among adolescents.

Despite federal law that requires parity between mental and physical health care (more on this below), a January 2022 report by the Departments of Labor, Health and Human Services, and Treasury found in initial determinations that one-third of all analyzed health insurance plans and issuers were non-compliant with existing law. Additionally, in 2020, nearly a quarter (24.7 percent) of adults with a mental illness reported an unmet need for treatment. So, what exactly is existing mental health parity law, and why doesn’t it seem to be working?

Passed in 2008 and implemented in 2013, the Mental Health Parity and Addiction Equity Act (MHPAEA) requires insurers to cover “illnesses of the brain no more restrictively than illnesses of the body,” although it does not require health plans to offer coverage for mental health or substance use disorder treatments. In other words, if a plan offers benefits for mental health or substance use disorders, the benefits must be no less restrictive than other health benefits included in the plan in terms of treatment limitations, provider availability, physician referrals, and payment amounts, among other things. Most group and individual health insurance plans are subject to federal parity requirements under current law as amended by the Affordable Care Act (ACA), including most employer-sponsored group plans, individual plans in the ACA Marketplace, Medicaid Managed Care Organizations, and the Children’s Health Insurance Program. Medicare, Medicaid fee-for-service plans, and small, self-insured group plans are among the few exceptions.

While the goals of mental health parity laws are straightforward in theory, they are complicated in practice and have been historically difficult to enforce. Prior to 2021, plans and issuers were not required to document parity compliance, which made it difficult for enforcement agencies—such as the Employee Benefits Security Administration (EBSA) which oversees more than 2 million private employment-based group health plans covering roughly 137 million Americans, or the Centers for Medicare and Medicaid Services (CMS) which has authority over non-federal governmental plans in all states and individual and fully insured group plans in Texas, Missouri, and Wyoming—to ensure beneficiaries were appropriately covered.

The Consolidated Appropriations Act of 2021 made parity requirements easier to enforce by requiring plans that cover mental health and substance use disorder treatments to prepare and document comparative analyses of all non-quantitative treatment limits, such as prior-authorization requirements or step therapy protocols, by February 2021. According to the January 2022 report, however, none of the responding 171 plans or issuers had completed a sufficient comparative analysis by that deadline. Even after obtaining sufficient information, EBSA and CMS made initial determinations of non-compliance for one-third of the respondents. Among the plans and issuers that responded, the most common parity violations were for excluding applied behavior analysis therapy to treat autism spectrum disorder and requiring licensed mental health or substance use providers to bill the plan only through specific types of other providers. For their part, insurers cite a lack of detailed guidance from federal agencies as a key challenge to being deemed fully compliant with the analysis requirements.

More than a decade after the MHPAEA began requiring mental health parity from insurers, its requirements have not been fully implemented. Whatever the challenges, the COVID-19 pandemic certainly reminded us that mental and physical health are related and highlighted the need for better coordination to fully achieve mental health parity.

The Medicaid Best Price (MBP) rule was created in 1990 as part of the Medicaid Drug Rebate Program (MDRP), which attempted to control government costs on prescription drugs. The MDRP’s subsequent effect on eliminating charitable contributions from drug manufacturers to hospitals led to the creation in 1992 of the 340B Drug Pricing Program (340B), with the goal of “stretching federal dollars” as much as possible by saving hospitals money on drug costs. The program has significantly expanded since its creation, especially in the last decade since the passage of the Affordable Care Act. Using data from the Peterson-KFF Health System Tracker, the chart below examines how retail spending per capita on prescription drugs has correlated with the introduction and expansion of the MDRP and 340B program, with specific emphasis on the 340B program. As the chart demonstrates, there are noticeable, and in some cases significant, increases in the rate of spending following the implementation of these successive policies. The Human Resources and Services Administration (HRSA) issued a rule in 1996 allowing hospitals and other entities participating in 340B to use a single contract pharmacy per entity to give 340B-discounted drugs to patients. In 2010, HRSA issued a further regulation allowing 340B entities to use an unlimited number of contract pharmacies. In every case, after a period of adjustment to the newest rule, spending increased further, particularly after the 2010 expansion. While drug pricing is complex, with many factors impacting prices, it is worthwhile to consider whether MBP and 340B are having an unintended retail spending impact. 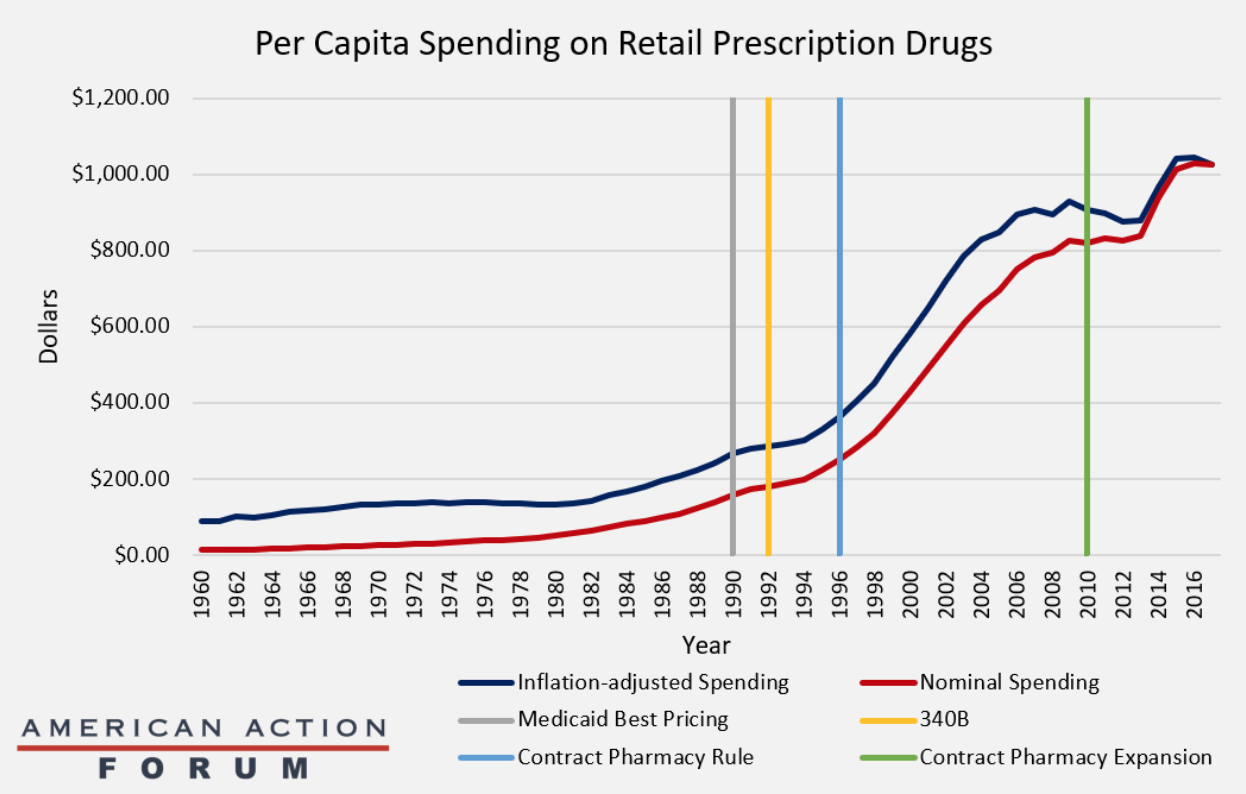 Wheat demand doing what farm laws could have done

How to buy homeowners insurance

How to buy homeowners insurance