Commercial-loan balances at Scotiabank’s domestic banking unit surged 19 per cent to $72.7 billion (US$56.5 billion) and gained 13 per cent to $96.2 billion in Bank of Montreal’s Canadian business in the three months through April. Fiscal second-quarter profit at both lenders topped analysts’ estimates.

While the economic outlook has softened amid expectations for continued interest-rate increases, preliminary figures suggest Canada’s economic growth at the start of the year exceeded expectations, and the unemployment rate last month fell to the lowest since 1976. That has the country’s businesses spending more to ramp up output and stockpile inventory to protect against supply-chain snarls.

“You had quite a bit of reopening and a lot of consumer demand in the quarter, so businesses are working to produce more,” Paul Gulberg, an analyst at Bloomberg Intelligence, said in an interview. “Businesses are also staring down the interest-rate increases that are coming, so they’re borrowing more now to lock in at lower rates.” 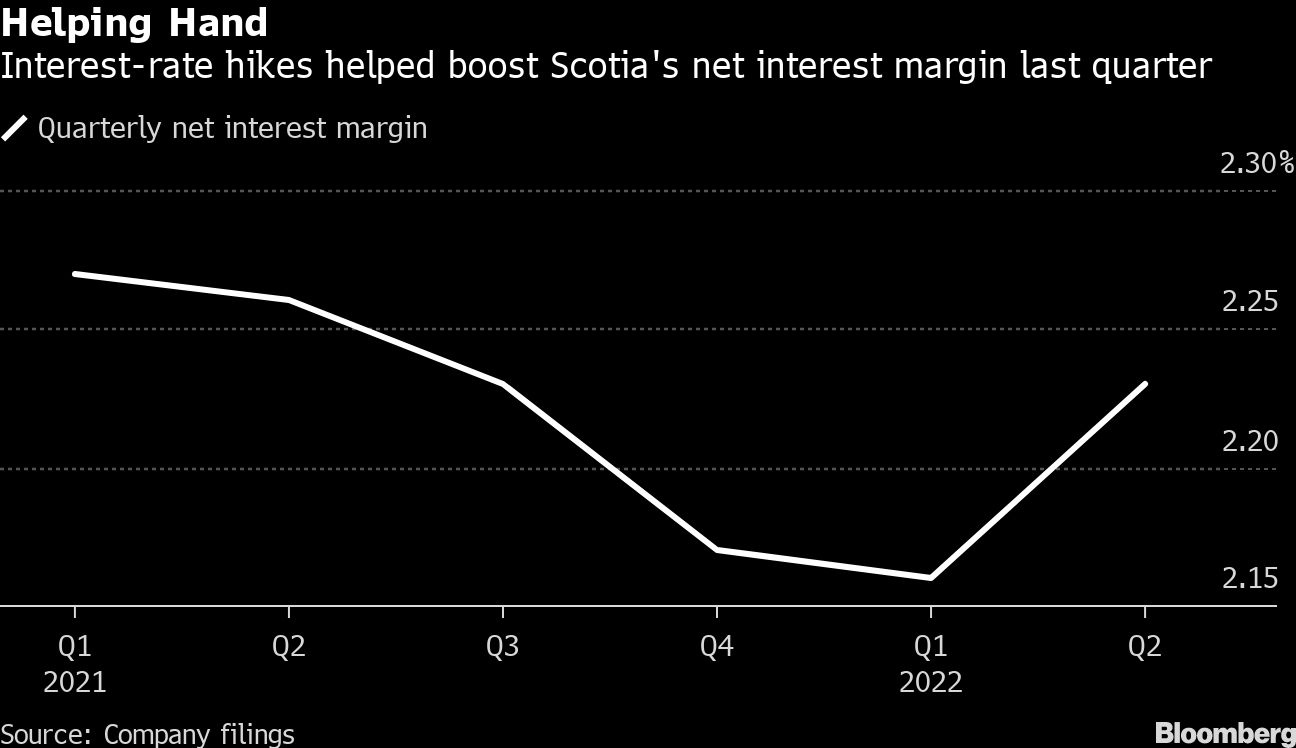 Interest-rate hikes gave an even more pronounced lift to results in Scotiabank’s Latin America-focused international business. The unit’s net interest margin widened to 3.86 per cent from 3.76 per cent in the first quarter.

Net income in the international segment surged 44 per cent to US$605 million, benefiting from growth in commercial loans and mortgages. The unit’s net interest margin also widened 10 basis points from last quarter, reaching 3.86 per cent.

“Scotia came in well ahead of expectations, with the continued growth in international along with a better-than-expected increase in the dividend the stock should see some support in the market,” John Aiken, an analyst at Barclays Plc, said in a note. “Scotia also showed the margin expansion that the market has been looking for in conjunction with rising rates.”

Bank of Montreal’s US business, which the lender is expanding with the US$16.3 billion acquisition of Bank of the West, saw the benefit of the commercial-lending expansion as well. Commercial loans there rose 9.4 per cent to US$85.7 million.

The business is slated to get a further boost, becoming North America’s fourth-largest commercial bank when Bank of Montreal’s purchase of San Francisco-based Bank of the West from BNP Paribas SA is completed late this year. Bank of Montreal reiterated that it expects the deal to close by the end of 2022.