The number of mortgages issued in April plummeted – while the average size of them still continued to increase, reaching a record high, the latest monthly mortgage figures just released by the Reserve Bank show.

The latest figures show that in April 2022 just 13,939 mortgages were issued, which is the third-lowest figure for a month since the RBNZ started producing this data series in 2014. The April figure was down from the well over 18,0000 mortgages issued in March 2022.

The only lower figures were recorded in April 2020 – when New Zealand was to all intents and purposes shut – and in January of this year when the market appeared to have temporarily frozen completely in the wake of new changes to the credit rules.

So, that means two of the lowest months for the issuing of mortgages have occurred this year, as the house market adjusts big time from its bull run in 2020-21.

The amount of money advanced in April, at $5.664 billion was actually fairly respectable. That’s in no small part due to the fact that the average-sized mortgage has now gone over the $400,000 mark for the first time, to over $406,000 in fact.

Looking at the breakdown of the mortgage monies advanced in April 2022 shows that first home buyers (FHBs) appear to be hanging tough in the rising interest rate environment.

The FHBs borrowed $1.046 billion in the month, which represented 18.5% of the total amount advanced and compared with just a 16.5% share for the FHBs in March 2022. It was in fact the first time this year the FHBs have month-on-month increased their share.

Incidentally, there were 1766 FHB mortgages issued in April, giving an average size of $592,000, which is the biggest average size this year, but not a record. That stands at the $595,000 average-sized FHB mortgage in December 2021, which was a big month for the first home buyers, with over $1.5 billion borrowed.

Investors borrowed $968 million in April 2022 and that represented 17.1% of the total – which is the lowest share for this grouping in any month so far this year. The figure in December 2021 was lower, however, with the share just 16.5% then.

The RBNZ has forecast that house prices might fall by 14% from the peak of the bull run to a trough in 2024.

These latest mortgage figures certainly paint a picture of a market that has lost its appeal – for now.

Given how quiet things already are, it will be interesting to see what happens over the coming winter months – the traditionally ‘quiet’ time. 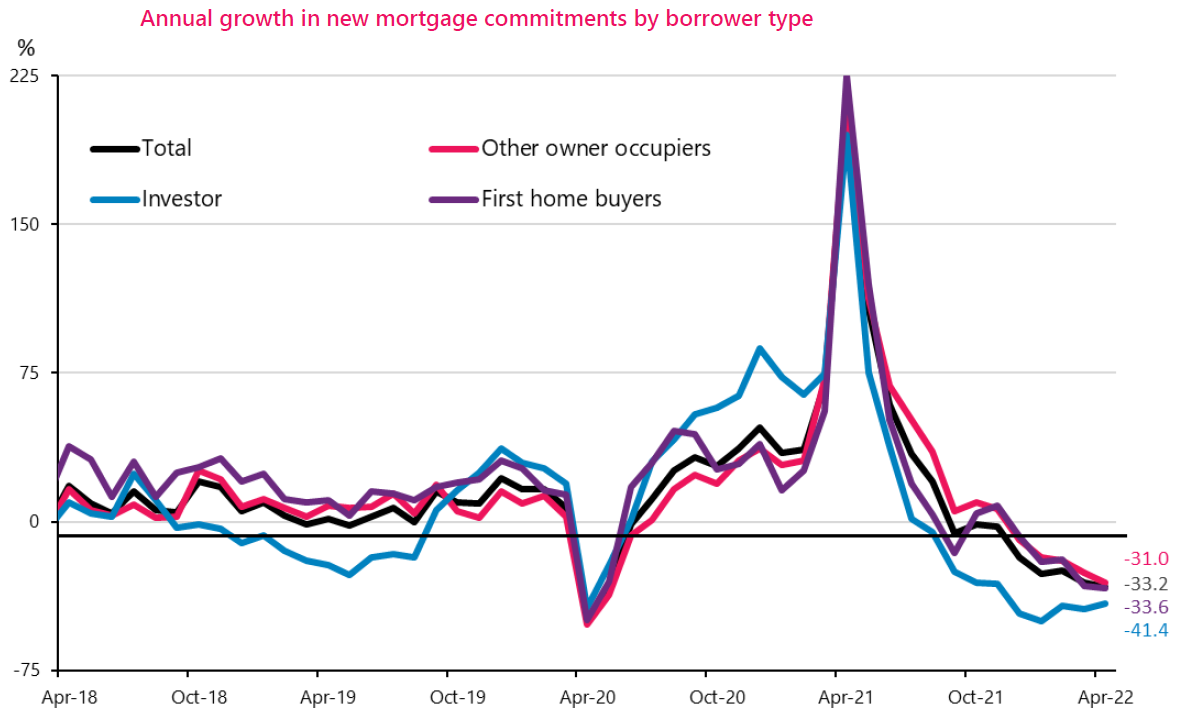 Banks in the UK have withdrawn a record number of mortgage products overnight following a sharp jump in gilt...