The increase in the ratio of new non-performing loans was more marked in certain sectors (accommodation and food service activities, construction, electricity and gas supply, mining and quarrying). The gradual withdrawal of support measures introduced in response to the Covid-19 pandemic (moratoria and State-guaranteed loans) explains a large part of the deterioration in the solvency of certain NFCs.

As identified in the Bank of Italy’s latest Financial Stability Report3, the ending of moratoria, in particular, contributed to revealing the fragility of certain NFCs. Those whose moratoria had expired represented more than 40% of the flows of new non-performing loans in the fourth quarter of 2021, from less than 20% in the second quarter. Meanwhile, the share of NFCs still benefiting from moratoria has fallen, dropping from more than 50% to around 35% over the same period. The consequences of the war in Ukraine, and more specifically its second-round effects, persistent bottlenecks in supply chains, the return of inflation and the increase in interest rates are all likely to increase the ratio of new non-performing loans over the next few quarters. This said, Italian banks have CET1 ratios and loss-absorbing capacities that are significantly higher than in 2012-2013, such that the increase in risk is, for the time being, on a completely different scale to that seen ten years ago. 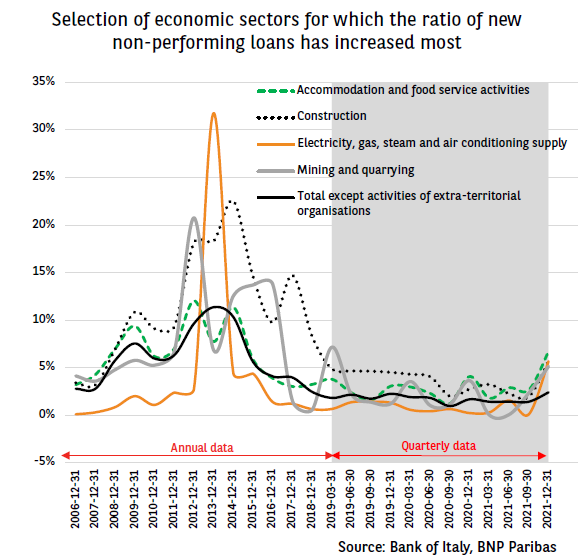