Thousands of ‘mortgage prisoners’ trapped in expensive Co-op Bank home loans are anxiously awaiting a landmark court decision that could decide their right to compensation.

Mortgage prisoners typically agreed loans before the financial crisis of 2008, in the days of easy credit. Now, after the introduction of stricter mortgage rules, they are seen as too risky, leaving them locked in sky-high default rates and unable to switch provider.

Co-op Bank last month launched a legal challenge to prevent the Financial Ombudsman Service (FOS) investigating a complaint about the fairness of rates charged to one customer, Gwen Davies. A decision is expected imminently. 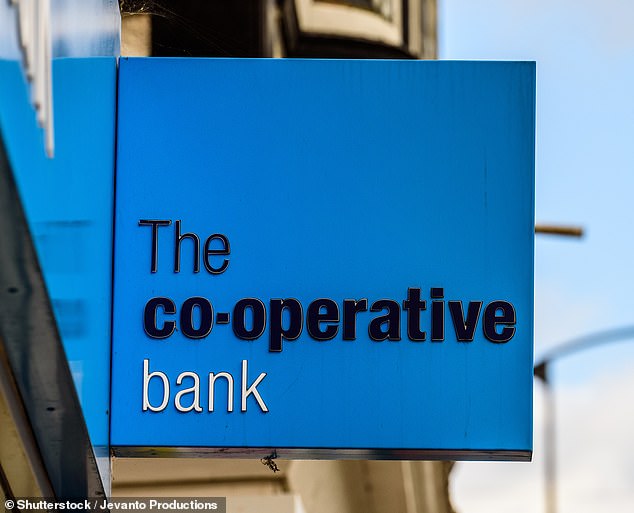 Looking for a sign: The All-Party Parliamentary Group on Mortgage Prisoners has criticised the bank’s ‘unfair rate increases’

The Co-op Bank nearly folded in 2013 after a £1.5billion hole in its accounts emerged. It is now owned by US hedge funds and recently returned to profit.

The All-Party Parliamentary Group (APPG) on Mortgage Prisoners has criticised the bank’s ‘unfair rate increases’ after some ‘very disturbing reports’ about the treatment of vulnerable customers.

Some have serious health issues. Paramedic Jon Jarrett, 52, took a mortgage on a Cambridge house in 2006 with sub-prime lender GMAC.

The mortgage was later taken over by Mortgage Agency Services Number 5 (MAS5) which is now part of the Co-op Bank. A series of four disputed mortgage rate rises between 2009 and 2012 saw Jarrett paying interest of up to 6.5 per cent, or nearly £500 a month extra, for the next decade while most households paid historically low rates.

He managed to pay the increased costs until 2019 when he was hospitalised for several months. He says he ended up selling items on eBay to meet his repayments.

During the pandemic, he was put on the ‘clinically extremely vulnerable list’ because he has primary immunodeficiency. ‘But the Co-op Bank told me that they would offer no assistance and that I should sell my home,’ said Jarrett. ‘The stress of this situation, of being fleeced by a bank that laughably claims to be ethical, is immense.’ He has set up a website mas5.co.uk to put pressure on Co-op Bank and encourage others to complain to the Financial Ombudsman Service.

Jarrett added: ‘The problem I and other Co-op mortgage prisoners have is that the bank offers no assistance in times of illness, no mortgage payment holidays. The option is either to sell up or be repossessed.

‘Many customers have contacted me who have already lost their homes because of these interest rate increases that the FOS has now found to be unjustified.’ The bank has argued that the ombudsman should be time-barred under dispute resolution rules.

Seema Malhotra, a Co-operative Party MP and chair of the APPG on Mortgage Prisoners, said: ‘We hope the Co-operative Bank will start living up to its ethical values and pay redress to the customers who have overpaid due to the misconduct.

‘The Financial Conduct Authority and the FOS need to… stop [the bank] from dragging out these cases and causing more misery to vulnerable people.’

A Co-op Bank spokesperson said: ‘We continue to support Mr Jarrett. Following a recent meeting with him, we are aware of the concerns he has raised but contest the accuracy of his claims. We remain committed to providing our customers with the support they need and achieving good outcomes for them based on their individual situations. Repossession of a customer’s house is always a last resort.

‘We have proactively sought ways to assist customers that could be considered as mortgage prisoners, implementing the ability to remortgage, subject to eligibility, and in line with our commitments as a responsible lender.’