By Wolf Richter for WOLF STREET.

Inflation in the Eurozone spiked to a new record in June, according to preliminary data released today by Eurostat. The overall rate of CPI accelerated to 8.6% in June, from 8.1% in May, and from 7.4% in April. All of them were records in the Eurozone data going back to 1997.

Inflation started spiking in August 2021, when it hit 3.0% for the Eurozone, well above the ECB’s target of 2%, but the ECB, aping the Fed, called it temporary. By December 2021, overall Eurozone inflation hit 5.0%, with two Baltic countries already in the double-digits. 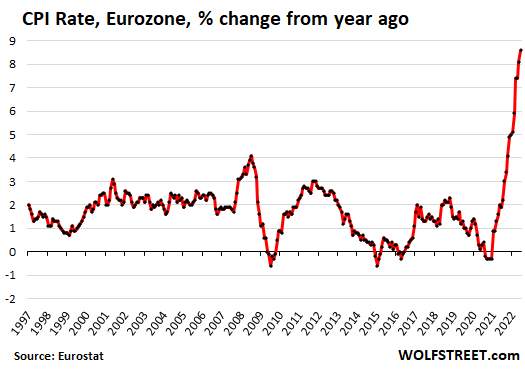 It happened suddenly after years of radical money printing and negative interest rate policies, when overstimulated demand for goods was followed by supply chain issues to produce these goods, and this explosion in demand for goods happened globally, but particularly in the US, creating all kinds of supply chain chaos and price pressures, all of which triggered a broad set of behavioral changes among businesses and consumers where price increases were suddenly tolerated, and higher costs were successfully passed on, and became entrenched as the inflationary mindset had taken over.

And the ECB President Christine Lagarde brushed all of it off for way too long – though they’re now too finally taking it seriously.

Energy costs have been surging all last year, and in early 2022, additional spikes in energy commodities occurred as Russia invaded Ukraine, and as the European Union, the US, and other countries imposed sanctions on Russia. The war in Ukraine also tore up supply chains of agricultural commodities globally and of manufactures goods for European manufacturers.

But many commodity prices have now been falling for a while, and the price spike of crude oil has stalled for now, and the crazy spike in European natural gas prices that occurred in March has been partially unwound.

And yet inflation continues to surge as price increases have spread across the economy.

Having seen this coming, and having warned about surging inflation for months, while being ignored by Lagarde, then-Bundesbank president Jens Weidmann, one of the few inflation hawks left on the ECB, asked German President Steinmeier to dismiss him from office effective December 31, 2021 for “personal reasons.” Everyone knew why he did: Disgust with the ECB’s monetary policies.

In his official statement at the time, Weidmann made a few gentle and vague references to his misgivings about the ECB’s dealings with inflation, such as when he said that it will be “crucial” to not look “one-sidedly at deflationary risks” but to also look at “prospective inflationary dangers.” And inflation spiked to 8.7% in Germany by May 2022.

In June, according to preliminary data based on the harmonized EU inflation measure released today, inflation in Germany dipped to 8.2%.

But this dip was largely due to the government’s actions to help take the bite out of this raging inflation, such as cutting fuel taxes and offering as of June 1 a €9-per-month pass as part of the Energy Cost Relief Packaged that allowed people unlimited travel on buses, trams, and rail systems across the country, which in travel season is a huge savings, on top of the commuting cost reductions. And so CPI dipped a little in June. 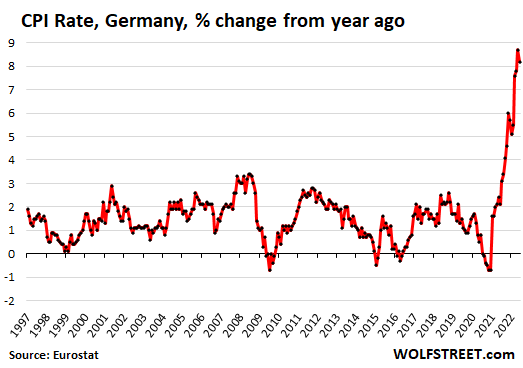 From least terrible to most horrible inflation.

The nightmare for the ECB is not only the magnitude of inflation but also the range of the CPI rate by country, with 9 of the 19 Eurozone countries experiencing double-digit inflation rates from 10.3% in Luxembourg to 22% in Estonia. The country with the least terrible inflation rate was Malta, at 6.1%.

These are massive scary inflation rates in the 19 Eurozone countries: 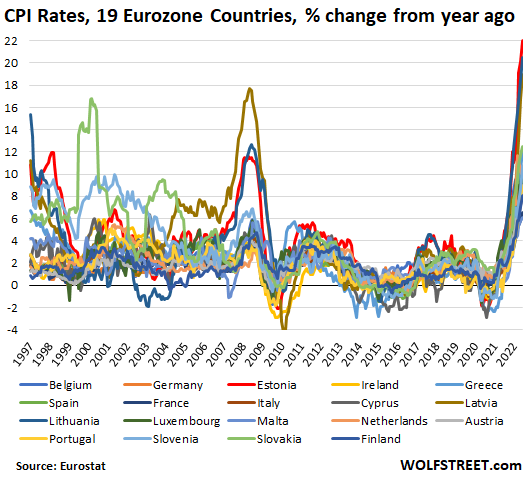 The risk of “fragmentation.”

This is ridiculously too little, too late. A huge amount of damage has already been done by this raging inflation. But just the threat of ending QE and hiking rates has caused government bond yields to surge – and to diverge.

By mid-June, the German 10-year yield hit +1.75%, and the Italian 10-year yield spiked to 4.17%, and the spread between them more than doubled to 2.4 percentage points. This was when “fragmentation” talk hit the front pages.

This resurging divergence in bond yields, as the bond market grapples with the first signs of being somewhat less manipulated by the ECB, is scaring the bejesus out of some folks at the ECB, in Italy (including “whatever it takes” former ECB head Draghi who’s now Prime Minister of Italy), in Greece, and in other fiscally challenged countries.

The resurging divergence in bond yields is scary stuff to the ECB that is now fearing “fragmentation” of the Eurozone. The ECB’s number one goal is not to keep inflation down, but to keep the Eurozone together.

So now it has come up with a new scheme where it will further and even more selectively interfere in the bond markets to prevent price discovery from taking place, whereby it will let German and other bonds roll off its balance sheet when they mature, but if yield spreads between Germany and countries like Italy widen beyond a red line, it will buy those countries’ bonds. In other words, it ends QE overall, but conducts QT for Germany and QE for Italy, or whatever.

Upon just these discussions and announcements – nothing actually has happened yet – the spread between Italian and German 10-year yields narrowed to 1.86 percentage points today. And inflation rages hotter than ever before in the Eurozone.

Enjoy reading WOLF STREET and want to support it? Using ad blockers – I totally get why – but want to support the site? You can donate. I appreciate it immensely. Click on the beer and iced-tea mug to find out how:

Would you like to be notified via email when WOLF STREET publishes a new article? Sign up here.