While the COVID-19 pandemic has created awareness among consumers on the need for having health insurance cover on the one hand, insurers hiking premiums might act as a dampener for a section of people in buying a policy on the other hand, amid inflationary pressures.

“It is true that several of the health insurers have increased their premiums by 10-15% in some of the products. The rise in premiums is due to the high claims received by the insurers in the last two years. Typically, insurance companies hike the premiums when loss ratios of their health products increase,” Rakesh Goyal, director, Probus Insurance Broker, a digital insurance broker, said.

In the last financial year (2021-22) insurers have paid COVID-19-related claims worth ₹25,000 crore as compared to about ₹8,000 in financial year 2020-2021. With such an explosion in claims, the premiums were to be increased as health care costs surged and insurance companies stayed away from raising the premiums due to the pandemic, he said.

According to a report from Motilal Oswal Financial Services, among Asian Countries, India had seen the highest medical inflation rate of 14% in 2021, followed by China (12%), Indonesia (10%), Vietnam (10%), and the Philippines (9%). 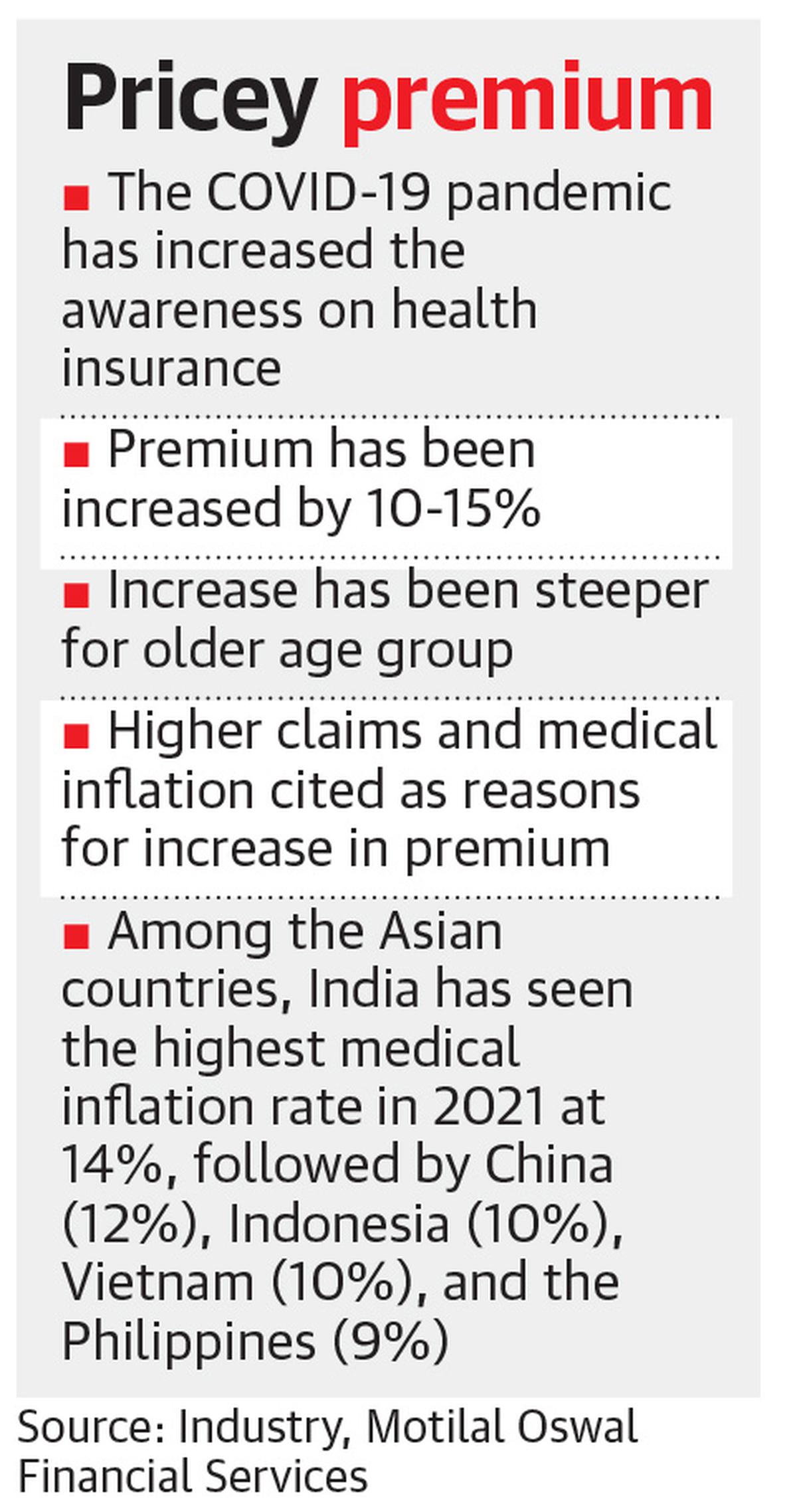 Elevated loss ratios along with medical inflation have driven Insurance companies to raise prices of both Retail and Group Health plans. While new customers had been impacted by higher prices, existing customers had seen a double-whammy of age-related increases and price hikes, it added.

As per Motilal Oswal, for a health insurance plan offered by a public sector insurer with a sum assured of ₹8 lakh, covering one adult aged 68, the premium had increased to ₹59,640 in FY22, from ₹40,195 in FY21.

Similarly, in a private insurer, the health plan for a person aged 42 covering two adults and two children with sum assured of ₹8 lakh, the premium has increased to ₹28,977 in FY22 from ₹27,598 in FY21, as per the report.

S. Prakash, managing director, Star Health & Allied Insurance pointed out that towards the end of last financial year, his company had hiked premiums on certain products on average by 9-10%. “We have taken revision after more than 3.5 years. Medical inflation is there, but price revision alone cannot be the solution for medical inflation. In proportion to medical inflation, we cannot keep on increasing the premium. Rather, we need to bring in some efficiency in managing claims and servicing customers and we are working in that direction,” he pointed out.

“Health Insurance is a game of larger numbers. As more people are covered, the premium increase won’t happen frequently,” he said.

Mr. Balasubramanian, a retired HR professional, said his son had recently renewed the policy covering parents and the premium had increased to ₹34,000 from ₹30,000. He said if there were going to be constant hikes, it would make it unaffordable.

Consumer activist T. Sadagopan said higher premiums were only one part of the issue and alleged that the other part relates to inflated medical bills by some hospitals and a lot of claims getting rejected on various grounds.

Naval Goel, founder & CEO , PolicyX.com, an online insurance marketplace said hike in health insurance premiums was not significant and pointed out that customers should expect hike in premiums every year due to inflation and healthcare costs.

If an insurer had hiked the premium and others are offering similar coverage at a lower premium, customers can consider porting the policy, Mr. Goyal of Probus pointed out

“Customers should also go for an optimal mix of a base cover and a super top-up, instead of continuously raising the sum insured on their base cover. This can help reduce the premium cost by as much as 20-25%, but adequate due diligence must be done,” he said.

Why Rates Shouldn’t Rise as Much as You’d Think

Why Rates Shouldn’t Rise as Much as You’d Think