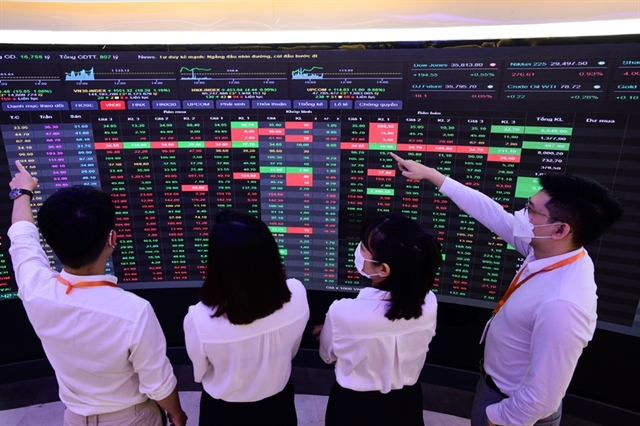 VIETNAM, June 4 –
A group of brokers and investors looking at the stock trading board. Photo vietnamnet.vn


HÀ NỘI — As securities and real estate sectors are not on the list to receive support, the 2 per cent interest rate support package’s positive effects on the stock market are not strong.


The Government officially issued a decree on interest rate support in loans of enterprises, co-operatives and business households on May 20.


The application period is in 2020 and 2023, or the package can end sooner when the total loans with interest rate support reach around VNĐ40 trillion (US$1.7 billion).


After the market benchmark VN-Index plunged up to 24 per cent from its peak in nearly two months, from 1,524 points to 1,150 points, the 2 per cent interest rate support package’s announcement is a lifesaver for the market on expectations of the return of cheap cash flows.


In fact, the index had witnessed outstanding recoveries for two weeks with gains of nearly 150 points. There are rising expectations about the cheap cash flows created from the package worth VNĐ40 trillion, equivalent to a preferential credit of up to VNĐ1 quadrillion.


However, experts said that this package only has indirect effects on the stock market. Therefore, investors shouldn’t put high hope on a strong performance of the market following the package issuance.


On the positive side, Agribank Securities Corporation (Agriseco) said that this support package is expected to create a boost for enterprises to accelerate their recovery speed, contributing to the whole economic growth to reach the Government’s target of 6-6.5 per cent. But if companies spend the Government-supported capital for the wrong purpose, it can lead to unwanted results for the economy.


Right after the supporting announcement, many were concerned that the interest rate package will cause the stock market to experience what had happened in 2009.


Experts from Agriseco said that, 13 years ago, Việt Nam also carried out an interest rate support package from the State Bank of Việt Nam (SBV) and applied for short, medium and long-term loans. The policy was a part of the fiscal and monetary policies aimed to stimulate the economy that was affected by the global crisis.


After the package was applied, from 2009 to 2011, there were speculative cash flows flocking into asset markets like gold, foreign currencies and real estate, which raised pressure on inflation since 2010. The consumer price index (CPI) soared 9.19 and 18.58 per cent year-on-year in 2010 and 2011, respectively.


On the stock market, the VN-Index posted an impressive gain from 230 points to nearly 500 points, equal to an increase of over 100 per cent in 2009, with the first appearance of the speculative cash flow on the stock market when the interest rate for production and business activities gradually decreased.


However, the market was on a bearish trend for the next two years. In 2011 only, the VN-Index and HNX-Index dropped over 25 per cent and nearly 50 per cent compared to the beginning of the year, respectively, with average liquidity down up to 60 per cent.


At the moment, Agriseco expected that the interest rate support package will have positive effects but not too strong on the stock market as the market’s size is now much bigger than that of 2009. Specifically, the market capitalisation at the end of 2009 was VNĐ620 trillion, accounting for 45 per cent of GDP, while the value at the end of 2021 reached nearly VNĐ5.8 quadrillion, hitting nearly 93 per cent of GDP.


“We also think that the market’s growth is driven by the improvement of business results and the inner strength of enterprises, instead of boosts from speculative cash flow,” Agriseco said.


According to the securities firm, there are two subjects benefiting from the policy, which are banks and businesses operating in supported sectors.


Business sectors in the support list include aviation, tourism, agriculture, marine product and manufacturing industries. Leading companies of these industries are more likely to meet the standards of the package because their resistance is better than the rest while facing the pandemic. — VNS

Gas Prices: 10 States Where Gas Prices Are Rising the Most