Liontrust Asset Management PLC (LSE:LIO, Financial) is down 52% over the last 12 months. The specialist fund management company, which has a strong sustainable bent, comes up in my “FTSE 250 Significantly Undervalued” GuruFocus screen. Other specialist fund managers have performed poorly over the last 12 months as well, such as Ashmore Group PLC (LSE:ASHM, Financial), down 46%, and Jupiter Fund Management PLC (LSE:JUP, Financial), down 51%.

Liontrust shares peaked last August thanks to rising inflows for its environmental, social and governance (ESG) related funds. A selloff of the ESG theme since then thanks to regulatory crackdowns on “greenwashing” has hit many financial companies claiming ESG friendliness. In fact, some of Europe’s biggest asset managers are starting to drop a once-ubiquitous ESG label from their company filings amid concern that regulators will no longer tolerate vague descriptions of environmental, social and governance investing with insufficient evidence to back them up.

However, the reaction in Liontrust’s shares seems to me to be an overreaction, driven by sentiment more than anything fundamental around the fund manager. With this overreaction, the old joke about asset management comes to mind: don’t buy the fund, buy the fund manager. The sorting of the ESG wheat from chaff may still take some time, but Liontrust is well placed to come out ahead.

Looking at the company’s latest full-year results, published last month, I believe that the selloff in Liontrust must be Mr. Market’s irrational behaviour, as the firm raised its final dividend by 39% and it showed it is still attracting the inflows it needs to generate its fees. Net flows going to Liontrust’s range of mostly ESG-themed funds hit 2.5 billion British pounds ($2.9 billion) in the fiscal year ended in March, compared with £3.5 billion in full fiscal 2021.

Now, it might seem that things are going in the wrong direction as inflows fell, but we must remember that in the fiscal year ended March 2021, markets boomed and many fund managers saw record fund inflows, and sustainability specialists like Liontrust did even better.

A fall in mandates on a headline basis is never ideal, but is largely due to some very difficult comparatives. Despite the difficult year on year comparison, Liontrust was still the second highest recipient of U.K. retail fund inflows during 2021, according to the respected Pridham Report.

Operationally, things have been going well and the company continues to produce profits. Statutory pre-tax profits more than doubled in the year ending March 2022 to £79.3 million, despite higher staff costs driving up administration expenses by £22 million to £152 million.

The reason the market is nervous about fund managers like Liontrust even more so than ESG investing in general is that regulators are taking a close look at ESG-themed investment products. In Liontrust’s home market, the financial regulator, the FCA, is introducing requirements to label investment products as “sustainable,” “not sustainable,” “transitioning” or “aligned.” Given that research by Research in Finance shows that professional intermediaries and retail investors regard Liontrust as having the best sustainable investment team, the firm is well placed to see the benefit of these regulations in its inflows as more retail and institutional investors reassess their mandates to take ESG considerations into account.

The new regulations are a response to a greater focus on greenwashing within the industry. Various asset managers have been accused of misleading marketing, i.e. greenwashing, where they intentionally mislead investors in regards to the ESG qualifications of their funds in order to bring in more profits. This means that Liontrust has a competitive advantage as it has sustainable investment at its core, and has been doing it for over 20 years, so it is the least likely to be accused of greenwashing. Importantly for the asset management industry, Liontrust has a strong brand associated with sustainable investment. Management also committed in the firm’s full-year results statement to “further the integration of ESG considerations into Liontrust’s mainstream investment processes.”

Price action in the stock

Liontrust’s stock has fallen further than earnings downgrades would justify, which confirms market sentiment has also played a part in the price action.

So how safe is the company? It has a reasonable Altman Z-Score of 3 and a decent Piotroski F-Score of 7 out of 9. The company holds about one year’s worth of operating costs in cash on its balance sheet. It carries zero debt, and it has operational gearing on higher sales, which would reverse when sales growth slows or contracts.

One argument is that the market is now preferring size, scale and diversification over specialzation. Industry leader Schroders (LSE:SDR, Financial) is down just half of what Liontrust has lost over the last year, which can more or less be attributed to the overall market environment.

All this really means is that Liontrust will be more volatile given its pure play focus as a laregly retail fund manager with a specialization in sustainable investment. The market pivoted away from ESG names after the start of the war in Ukraine to previously unloved commodity and defence stocks. Additionally, many ESG stocks are growth stocks, which have been hit by the increase in interest rates, so the ESG theme has been out of favor recently from the tech side as well.

Overall, I believe Liontrust is still a good value now. Once you strip out cash, the stock trades at just over 7 times forecasted earnings for this year and has a dividend yield of nearly 7%, which is covered twice over by net income. The rise of sustainable investment isn’t a fad, and Liontrust has a chance to win more share from institutional clients thanks to the regulatory changes that will do real damage to those guilty of greenwashing. Asset managers are taking sustainability very seriously, as are the younger generation in retail markets. Liontrust’s long track record demonstrates they it has the in-house knowledge and culture to gather more and more assets under this new paradigm.

At just under £9 per share, I think the stock offers a great opportunity to take a long-term view on this fast-expanding area of fund management. The GF Value chart concludes the same, rating the stock as significantly undervalued. 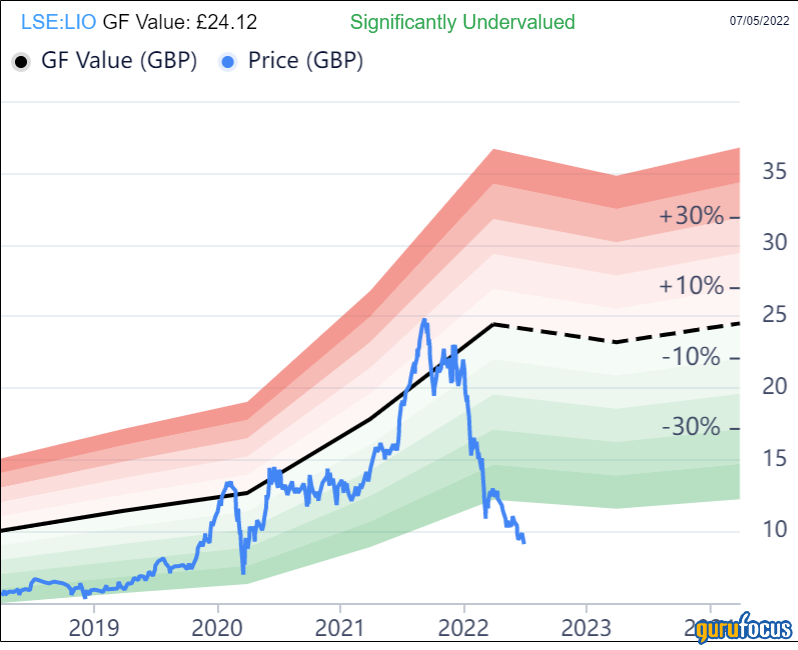 CoreVest Gearing Up To Make More Bridge Loans to Flippers