Global banks are facing increasing regulatory pressure over their climate change vulnerabilities — ranging from the risks posed to the future value of assets, to the difficulty in dealing with heavily polluting clients.

At the COP26 climate conference in Glasgow last year, many banks congratulated themselves on their ‘green’ financing initiatives. But the world’s biggest banks have also been criticised for offering $742bn in financing to carbon-intensive energy businesses in 2021, according to the Rainforest Action Network, a campaign group.

And that leaves them exposed to two financial risks in the years ahead. First, they are exposed to any transition away from ownership of fossil fuels that risks lossmaking disinvestments or the creation of “zombie” or stranded assets of little or no value. Second, even if their financing is greener, they are still exposed to assets that are physically vulnerable to rising temperatures, flooding and other extreme weather events.

In a report in September, the Federal Reserve Bank of New York said that, if banks together suffer losses following a sudden change to the physical or transition risks posed by climate change, that “poses a considerable risk to the financial system”. Under the climate stress scenario applied in that report, for example, Citigroup — one of the largest financiers to fossil fuel businesses — would need to raise $73bn to maintain an adequate capital cushion.

Central banks around the world are also developing stress tests specifically to gauge the risks that climate change creates for the banks they supervise.

The Bank of England and the European Central Bank have said they will publish results in May and July respectively. Australia’s Prudential Regulation Authority is also set to publish its results this year, while Singapore has said it will carry out tests “under a range of climate change scenarios” by the end of the year.

Conventional stress tests can result in lenders being made to raise and hold additional capital, which can limit their ability to issue dividends and buy back shares for investors.

However, the ECB and BoE have said that they will not immediately require additional capital raisings as part of their climate stress tests. Instead, regulators are expected to use the results to warn banks that appear unprepared or have poor risk management, according to rating agency S&P.

Some believe the results will be good. AlphaValue, a Paris-based independent equity research firm, has said the banks’ climate stress tests are likely to show that the sector is properly capitalised to withstand the potential for extreme weather.

“We do not expect regulation to have an impact on the sector in general and we see very few banks that could be stigmatised due to overexposure or governance issues,” says David Grinsztajn, an analyst at the firm. He suggests that heavily polluting businesses will need banks to pay for their energy transitions — a likely boon to lenders. “We believe that banks with strong exposure to carbon-intensive sectors are best placed,” Grinsztajn argues.

However, David McNeil, director of Sustainable Fitch, a division of the Fitch credit rating agency, argues that the qualitative findings from the climate stress tests could eventually prompt regulatory action — including capital changes.

Canada’s Office of the Superintendent of Financial Institutions, McNeil points out, has said it will expect financial institutions to build up their capital buffers in the years ahead to absorb a rapid increase in the price of carbon.

In March, the US Securities and Exchange Commission also unveiled proposed rules that would require companies — including banks and other financial services groups — to disclose more information about their climate risks.

The rules would require big banks to disclose their “Scope 3” emissions, which include carbon emitted by their entire financing portfolios. For example, the emissions from a steel plant with a bank loan would probably be included in that bank’s Scope 3 tally.

This need to disclose a broader measure of emissions has set off alarm bells inside banks, according to bank staffers and regulatory lawyers.

Scope 3 disclosure is a worry for banks on three fronts. First, the banks are afraid of rising regulatory costs associated with counting up all the carbon in their lending businesses. Second, banks see reputational risk lurking in the publication of these emissions — big Scope 3 numbers could brand banks as enablers of massive pollution and could put them at a disadvantage.

Third, and perhaps most importantly, banks are also concerned that bad Scope 3 figures could invite a carbon tax or other financial burdens on them, as well as on their clients. 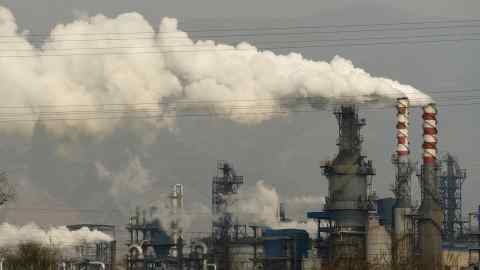 The SEC’s proposed rules would require banks to disclose their internal carbon prices, too, posing a similar problem to the Scope 3 figure. Many banks use a carbon price to help mitigate risk or to spot investment opportunities. While some companies, such as the mining groups Rio Tinto and Vale, have disclosed the internal carbon price that they use, banks have resisted its publication.

These concerns have prompted the banks’ lobbyists in Washington to gear up for a fight at the SEC. The period for commenting on the proposal closes on May 20 and banks are expected to weigh in with objections.

“The SEC should proceed in a more measured and considered manner in terms of requirements for what must be included in financial filings,” says Lauren Anderson, a senior vice-president at the Bank Policy Institute, which represents many of the world’s big banks.

State Minister of Finance Ranjith Siyambalapitiya has requested heads of state banks to consider the possibility of granting optimal...

Health insurance premiums to take biggest jump in a decade

M&M’S is adding a new character