Persons living with leprosy in Ogun State have decried the worrying state of security around their colony in Iberekodo Area of Abeokuta, the Ogun State capital.

They noted the colony built by the government many years ago is now “too porous” as there are exit routes everywhere.

Speaking on behalf of others, Jimoh Ahmed, the Chairman of the Ogun State Integrated Dignity Economic Advancement (IDEA), the association that caters for people affected with leprosy also advocated for soft loans that can enable those who can still do petty business start some trade.

He made the appeal when a non-government organisation, JAW JAW Africa donated food items to members of the colony.

“Another problem we have here is security, every day we are only sure of going to bed but waking up is God’s doing. Our colony here is too porous. There are exit routes everywhere. Before now, there are no houses around us but development has made people build houses all around the colony.

“At night, the whole of this place will be in total darkness exposing us to more risk but what can we do? So, if you ask me to make request now, I will appeal for solar street light, even if it is just two that we can get, we will forever be grateful,” Ahmed said.

A septuagenarian at the colony and Chairman of the elders council, John Ojuawo, also corroborated this climb while lamenting that they stopped farming inside the colony after cattle destroyed their farmlands.

For the IDEA Secretary, Folorunso Lukman, lack of capital is an hinderance to their many goals and aspirations.

Lukman said: “Our present situation has frustrated some of our children out of school to learn either a trade or handwork after learning, we still don’t have money for them to start up or buy work tools for them.

“We didn’t bargain for this but it happened, we have accepted our fate. We haven’t failed until we can not help our children to make good lives for themselves.” 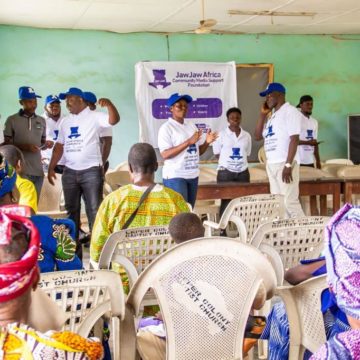 Convener of JAW JAW Africa, Victor Eniola-Mark, while noting that the NGO priotises issues affecting children, youths women and the elderly and would facilitate the construction of the solar streetlight in the colony, adding that security must come first in all human dealings.

“We shall be waiting for the list of all the complaints you have made here today for consideration. We will work with you and as well with our friends who we know should be able to help in achieving a more comfortable life for you all.”

The NGO  also went to Gideon Orphanage Home and a juvenile correctional center all in Abeokuta.

IN CASE YOU MISSED THESE FROM NIGERIAN TRIBUNE